“Sherlock Holmes?.. Hmm not my type of series.. nothing to beat Agatha Christie!”  I would have said. Even though I die for crime and murder in books, I never acknowledged SH series till date! ( Ignominy for a so called bibliophile eh! 😞).

A few days back it was boredom that forced this book into my hands. Well, as per the review given by The Times, ‘Horowitz has captured Holmes heaven‘- no harm in giving it a try right! With the book in hand, I never realized that it would turn out to be so enthralling and engaging that it would push me off the seat each page!! “They were surrounded by white pine trees that soared up all around forming a natural  screen behind which they might commit their crime” – There is suspense and crime laid out around every corner. 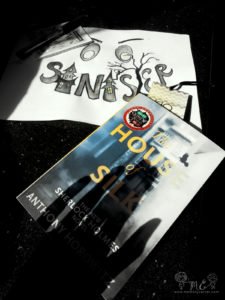 Holmes is always Holmes! Not a fleck of information escapes his sight, leaving the rest astound.. ” I know who he is, I know what he wants Watson. “- everything is quite self evident for Mr. Holmes! What is it that has instilled his curiosity this time? What has he done to end up behind the bars? Is this an end to the great Sherlock Holmes?.. Well the answer lies deep within the folds of this book! 😜

” Are you from the House of Silk? Ross is not here. He has never been here and you will not find him. “

Set amidst the Victorian London, ” The House of Silk ” by Horowitz is indeed a profound paean to Sir Arthur Conan Doyle. Highlighting the issues like opium dens and the verboten forces out there, The House of Silk itself turned out to be ‘the opium read’ to it’s readers.

Now I begin to wonder.. how would it have been if Sherlock Holmes was to be paired up with Mr. Poirot!! 🤔